After one of the deadliest school massacres in U.S. history, Americans are hotly debating gun control and public investment in mental health.

There’s little compromise in sight on those contentious issues, but police, employers and experts are nearly unanimous on another scary topic — how potential victims should respond to the immediate threat posed by an active shooter.

The U.S. Department of Homeland Security teaches a three-step response known as Run-Hide-Fight. The approach is embraced by large employers such as Publix Supermarkets and Office Depot and local law enforcement agencies, including the Palm Beach County Sheriff’s Office.

Using Run-Hide-Fight as a building block, law enforcement experts at Texas State University tweaked that approach and created a three-step plan known as Avoid-Deny-Defend. Walmart teaches that curriculum to its employees… 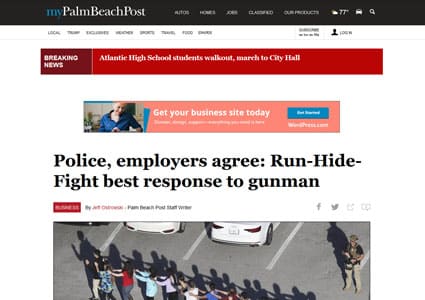