The man with the blue plastic gun appeared around the corner, and people started running. Other staffers in the large open office tried to disrupt the gunman—by lobbing brightly colored balls at him.

The exercise at the Certified Financial Planner Board of Standards prompted some laughing rather than screaming, but the subject was deadly serious: how to respond when someone starts shooting. CEO Kevin Keller said CFP Board puts a priority on security. He noted that the group enforces professional standards and holds hearings at its office at 1425 K St. NW in Washington, D.C.

“There are people who may not be happy with us from time to time,” Keller said. Active-shooter training “is the appropriate thing to do to help equip our staff in the 21st century.”

The killing of 17 people at a Florida high school Feb. 14 was the 30th mass shooting of 2018, according to the nonprofit Gun Violence Archive… 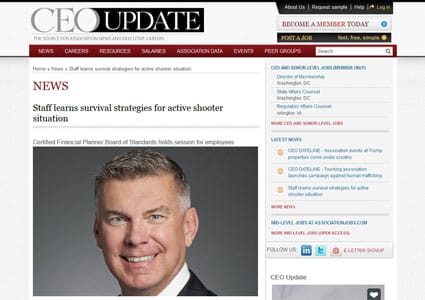