Active-shooter training for office workers used to be about hiding. Not anymore.

A day after the terrorist attack in San Bernardino, Calif., left 14 people dead, Temony McNeil was on the floor of his Washington office, pinned down by co-workers.

At 6 feet and 240 pounds, McNeil is no pushover. But when colleagues being trained to take down an active shooter got control of his neck — he’d need Advil afterward — the senior accounting manager found himself unable to go anywhere.

McNeil, 39, had been tapped to impersonate an active shooter in the role-playing exercise. With guidance from a former SWAT team officer, his co-workers at NeighborWorks America, an affordable-housing group based in the District, were rehearsing their response — going after their predator, not cowering behind a desk or hiding in the corner. 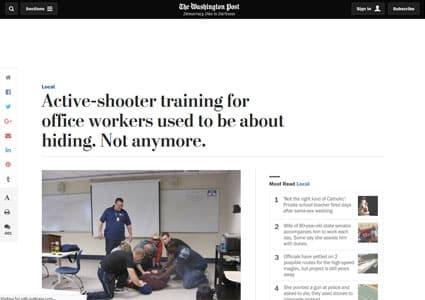