Run, Hide…Fight? Responding to Terrorism is not as Simple as you Think.

About 30 people are in a conference room at the Frederick Chamber of Commerce’s offices on Gas House Pike. An announcement booms over the crowd: “Shelter in place until we give you additional information.” A loud alarm sounds and most try to squat down behind their make-believe chairs, cowering. A masked gunman bursts into the room. He stops, takes out his gun and methodically starts shooting. A man in the third row. A couple of women in the second row. Several on the other side of the aisle. With his plan done, the gunman calmly exits the room.

“I think I’m dead,” says one woman, getting up.

“I got shot,” chimes in another ‘victim.’

“How did that work out for everybody?” Zimmerman asks. Many shake their heads. Some say, “Not good.” “Would that be your ideal response option for you or your children?” Zimmerman asks. “No,” the audience murmurs in unison. 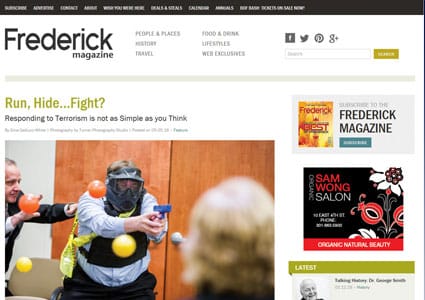